This original posting from 2012 has been updated with a current fleet list (June 2014) only: 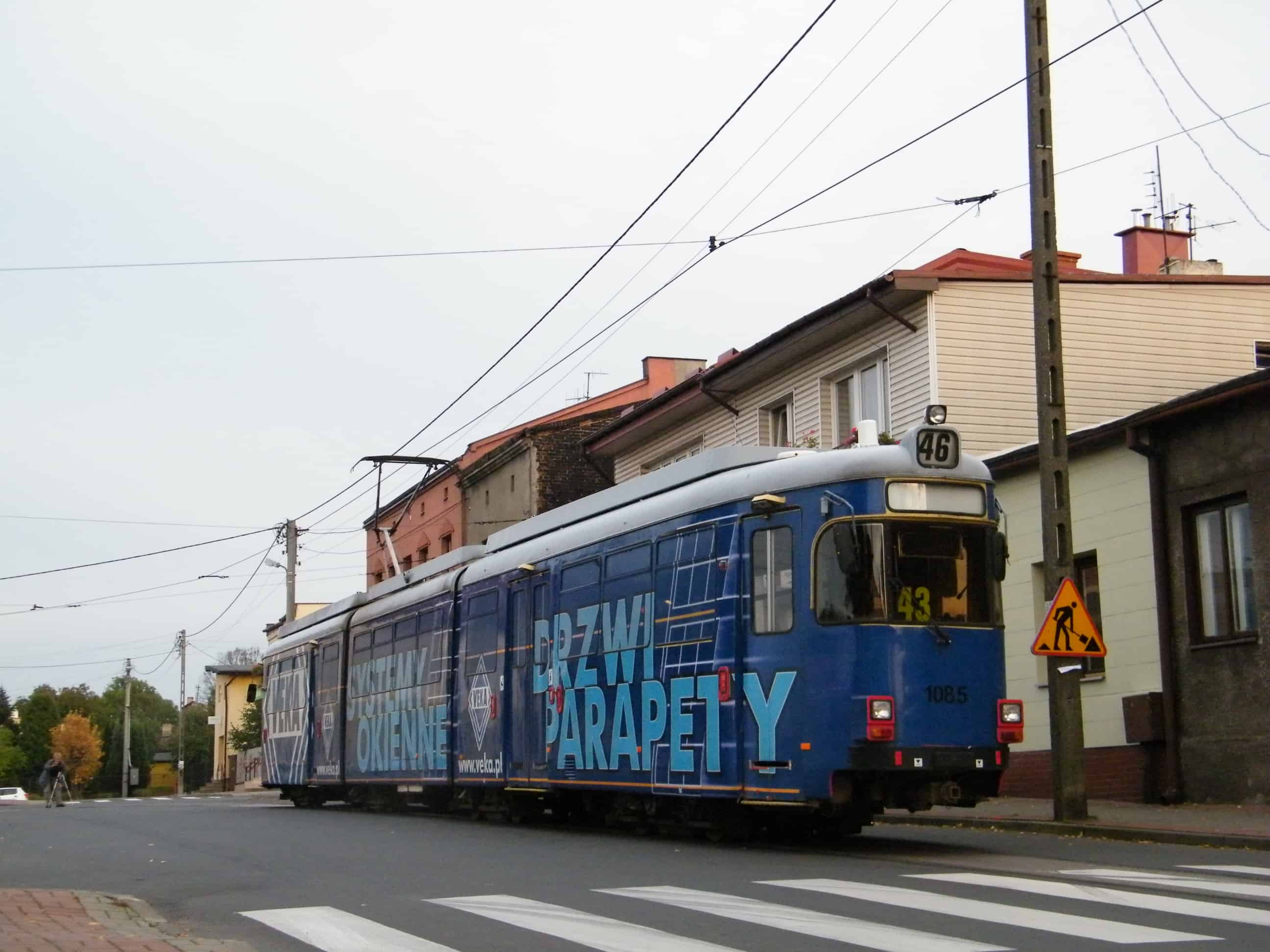 Much has happened in Lodz in 2012. We now only have one operator (MPK) and much of the interurban rolling stock has been scrapped. MPK absorbed parts of the MKT and TP fleets (those vehicles not taken over were scrapped or are still in the process of being scrapped – no workscars were taken over but so far all of them survive at Brus and Helenowek depots). 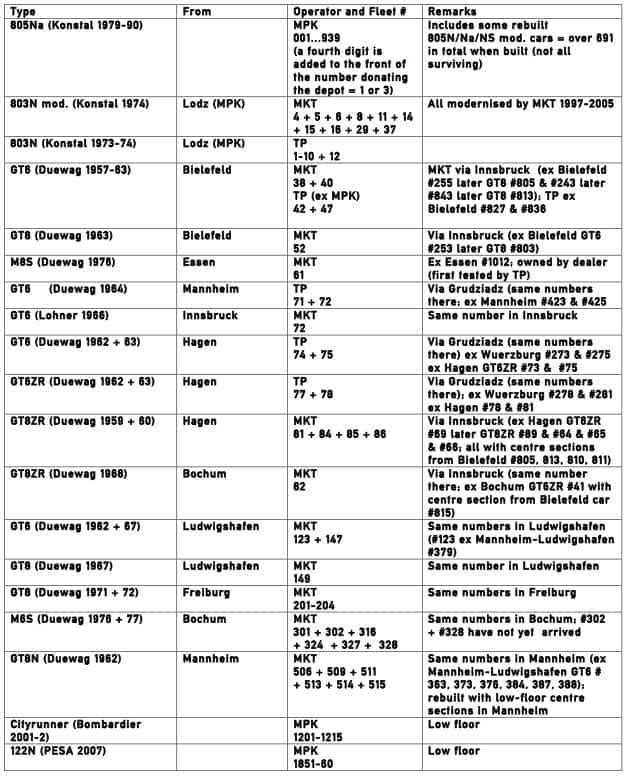 What we have not yet included are the passenger tram carbodies owned by the tram club which still are stored in the open at Helenowek depot. MPK also uses some ex 1950/60s Konstal chassis to transport modern bogies (no details known). Also a couple of ancient 4-wheel freight cars survive at Brus, Helenowek and Chocianowice depots plus a 8-wheel flat waggon at Chocianowice (no fleet numbers known). It is hoped that most if not all will eventually move to the new Brus transport museum which is supposed to be set-up later this year. As we write this Brus depot is closed and almost empty (except for 2 workscars and some equipment owned by the tram club). At Helenowek the scrapping of cars continues. We hear that MPK will now not take over Helenowek depot (which is owned by Lodz city)! Tram club owned no.2 (ex TP) is currently at Helenowek plus some privately owned cars (see list). No. 2 is supposed to move to Chocianowice depot next but eventually will go to the transport museum in Brus. Some of the ex German cars at Telefoniczna are now stored on the grass (i.e. off the track) because of acute shortage of space.

The regular fleet has always been issued with a 3 digit car number (e.g. 001-999). In 1985 (except for the historic cars and the ex MKT cars where the lease has been taken over = ex Mannheim and ex BOGESTRA cars) a fourth digit was added to the front of the number denoting the depot:

To make things more complicated, most workscars were renumbered (in the 1970s) into the 2000 series (but allocated to any depot) and these cars later (in the 1980s) received another prefix:

1-3 = depots as above
7 = training cars (prefix no longer in use for them today), also some workscars at Tramwajowa carried this prefix
9 = general workscar prefix (permanent way division “Zakład Torów i Sieci” – but cars can be found at all depots and not just the ZTiS yard opposite old Dąbrowskiego depot). 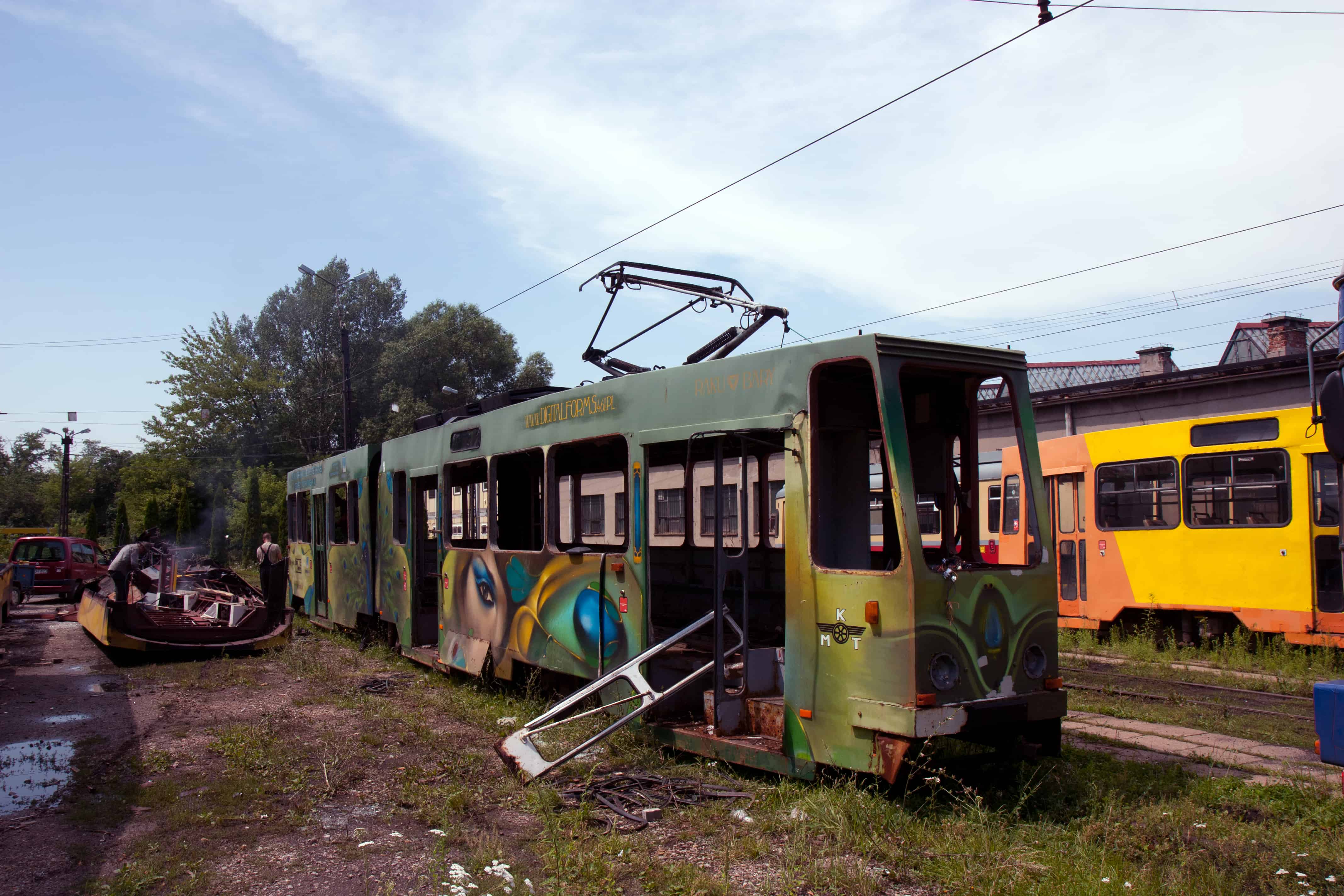 On Wikipedia you find various articles (some only in Polish) that deal with the different versions of these Konstal trams. The original cars (this includes the standard gauge 105N/Na cars) were technically very similar to the Warsaw 13N type which itself was more-or-less a blatant copy of a CKD Tatra T1 car (Warsaw had bought two of those). The T1 is of course based on an American classic: the PCC car. So many of the 105/805 cars still around in Poland today with their original foot controls are really PCC cars. Some cars have been rebuilt with more modern control equipment and starting in 2004 many (let’s concentrate on the 805s here) trams were thoroughly modernised. MPK Lodz has done a lot of their cars and they also did modernisations for other systems: Gdansk, Silesia and Torun. Here is a list of the 805Na ND cars rebuilt in Lodz (only the MPK Lodz fleet is mentioned). Note that during 2005 they left out the cabs in the second trams of the sets (without a cab they are called 805NaD/2). Four sets received different control equipment and are called 805N-Enika (the last two sets now feature a new door layout in the middle giving more space on board: one double door instead of two double doors). It has to be mentioned that MPK Lodz does not (or at least not always) modernise the trams in the original order. A tram going in for modernisation usually comes out bearing a different fleet number! We are not aware of any official re-numbering lists. Sometimes motormen go out in the yard to pick up their tram for the day and they find two sets with the same numbers (the original set and a modernised set bearing the same fleet numbers – the old set will of course soon depart for the Tramwajowa works)…

There are also the following cars in the fleet today with different control equipment in the fleet (one could call them “sort of modernised” – only the bodywork has not been updated):

We are still working on a list of the surviving non-modernised cars. 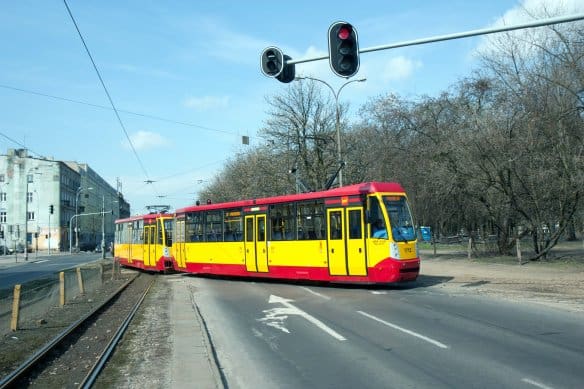